In celebration of the upcoming solar eclipse (August 21st) I decided to discuss the music video: Total Eclipse of the Heart by Bonnie Tyler (1983) 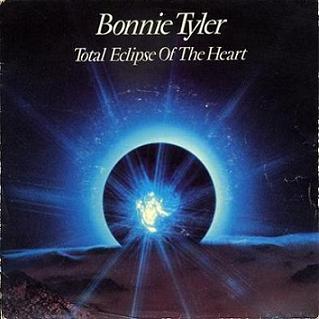 This music video was directed by Russell Mulcahy and filmed in this huge Gothic building which upon further research was the Holloway Sanatorium in England. The main premise of the video is that Bonnie Tyler is a teacher at a all boy’s boarding school. She is portrayed as some kind of angelic or pure figure in the music video because she is dressed in white from head to toe.

She starts to daydream about her students in various school activities such as a playing football or in choir. Although all the students in her fantasy are some kind of demon like creatures because they have glowing eyes or have extreme vacant looks on their faces while being stuck in Bonnie Tyler’s fantasy.

This is one of the first music videos I remember watching when my family first got MTV. I was pretty young when I first watched it and remember that my first impression of this was watching a mini horror movie in music video form.

Bonnie Tyler is rejecting her fantasies because throughout the video she is seem either running in the halls by herself or scare to actually approach and interact with the boys she comes across. Since the song is called “Total eclipse of the heart” the video is full of random full moon shots while all the chaos is happening at the boarding school. The only way she is saved from her fantasy is that her guardian angel saves her from the night of her dream and touches her by his wings for her to wake up because the next shot is a day shot outside the school.

Although it was a bit confusing to me as to why they decided to go with this concept for the video it is one of my favorite songs and quite a memorable 80’s music video!