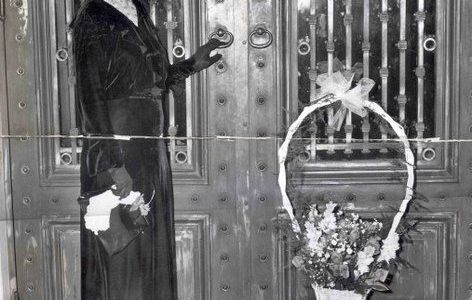 When Rudolph Valentino died in the early morning of Monday August 23, 1926 the world was devastated. He had fainted at “The Hotel Ambassador” on August 15, 1926 then he was brought to the New York Polyclinic Hospital. The doctors who treated him diagnosed him with having a couple of gastric ulcers and appendicitis (they referred his symptoms to “Valentino syndrome.”). So they decided to perform surgery the same day Valentino was admitted. However he was not ok after the surgery he had gotten peritonitis. Which is severe inflammation of the peritoneum. It is the lining a the inside wall of the abdomen and acts as the cover of all of the abdominal organs. On August 18 the doctors were on the fence about Valentino overall health. And by August 21 Valentino was doing worst because peritonitis had gone to his left lung which made him very frail.

However no one wanted to tell Rudolph Valentino the truth about his ill fate and he actually believed that he was getting better. So on the morning of August 23, 1926 he was talking to the doctors when he fell into a coma later that day and died. He was only 31 years old.

During his days as an actor he became a sexual icon for those who watch his movies. Rudolph was given such names as the “the Latin lover”, Valentino or “the Great Lover.”

More craziness ensued that day thanks to actress Pola Negri.

Pola Negri was a popular actress at the time. She met Valentino at a costume party at San Simeon (William Randolph Hearst and Marion Davies were known to have various parties with a theme.) and it was claimed from there until the time of Valentino’s death that they were lovers. When she was at his New York funeral she caused such a scene such as collapsing, fainting and sobbing loudly various times throughout the procession that it definitely caught the attention of the media.

She even had a huge floral agreement that spelled out her name to be put next to Valentin’s coffin but it was refused. She also claimed until her death in 1987 that Randolph Valentino was the love of her life.

Rudolph Valentino had made no arrangements for his death because he did not think he was going to die. So a friend of his by the name of June Mathis stepped in to help. For a short time she offer a crypt that she bought for herself at Hollywood Forever Cemetery (Hollywood, California) until other arrangements could be made. Mathis bought the crypt for herself and her husband however they divorce and she got the crypt. Unfortunately Mathis died a year after Valentino so she ended being bury where her (ex) husband was going to be.

And Valentino was never moved. So I am guessing that maybe that they were still friends in the after life. Valentino’s films were more in demand after his death and so they were brought out and played in movie houses until the mid 1930’s. Those in demand Rudolph Valentino movies paid for a lot of bills from his estate.

There has been a long tradition of a “lady in black” appearing at Valentino’s grave. It started around 1928 where a woman would arrived completed covered and veiled in black bring a one rose (some say it’s two roses) to bring to his grave.

She said it started when she was 14 years old and was in the hospital with a terrible illness. She had a visitor from a family friend who happened to be Rudolph Valentino. He put a single rose in her hand and told her that everything will be ok and she will live. And he made her promised that if he died before she does to visit his grave so he won’t be alone. After her death in 1987 the tradition still continues and there is still a lady in black visiting his grave.

Sources, Wikipedia, youtube.com, This was Hollywood by Carla Valderrama.