This week’s welcome to the insta-hood is on IG account : @theknaveofswords !

“My name is Dan Kingston, I’m 25 years old, currently working as an English and Drama teacher/director. I’m a fortune-telling enthusiast, having assembled quite a nice collection of various decks of cards (both of fortune-telling and… let’s say, ordinary variety). I’m also quite keen on the history of traditional, folk witchcraft (quite difficult to gather any useful info about that these days, I must admit), cinema, theater (since I have background in both), opera, XX century Anglo-American literature, as well as video and board games. In addition to that, I also write poetry, occasionally perform as an actor and singer, and even more occasionally play soccer.”

2. I noticed you have a Youtube Channel. Can you talk about it a little?

“Basically, the need for the YouTube channel arose a few years ago, when I noticed that there aren’t many videos in English about the traditional European cartomancy. You see, in the English-speaking world we mostly know about the Tarot as the, for lack of a better word, “ultimate” fortune-telling deck, when, in fact, it’s not. In some parts of Europe, the Tarot is popular, but still the ordinary deck of playing cards is the method of choice (for example, in Russia, where I currently live).

Those historical cartomantic traditions are rarely spoken of these days (for example, there’s still no good book in English about the fascinating Russian cartomancy, or the French one, or no good modern reprints of the early XX century cartomantic books with their intricate spreads). So, in order to preserve them, I started that channel – also because I wanted to show everyone that there are other systems, sometimes even more handy or fascinating than the Tarot can be.

It never really gained momentum, as I discovered the pleasures of Instagram – but I never really intended it to be an ultra-popular, ubiquitous channel. It’s on indefinite hiatus now, since I grew a bit out of love with YouTube – but I’ve been considering reviving it as an IGTV channel, since most of the people I’m really interested in sharing my spread and method collection with are mostly based on Instagram. So, the last thing left is to find the new format! “

3. What is your favorite Tarot card deck you have work with and why?

“That’s a good one, really, since I’m always torn between two decks, if I have to choose a favourite. The first one has to be the 1970’s British Blue Box edition of the classic Rider-Waite deck, which I got at an auction – and won right at the last second (which makes me prize it even more,). The fated deck, no doubt!

Blue Boxes are amazing in regards to the card stock quality and colour renditions (both things sordidly tampered with in the recent Yellow Box US Games Inc. editions of the Rider-Waite – the bloody thing can survive a nuclear explosion). Of course, there are other editions of the Rider-Waite these days (the so-called Original, the Borderless, the Pamela Coleman Smith Commemorative, the AGMuller also released a couple), but they all have a huge downside – colours. You see, if we compare the surviving first printings of the Rider-Waite to the modern “vintage-tinted” editions, we can clearly see that the cards simply don’t age that way – they fade, they don’t become tea-tinted, with brown hues. The Blue Box has the potential to fade to its ultimate glory sometime – hopefully, I’ll be around to see it. 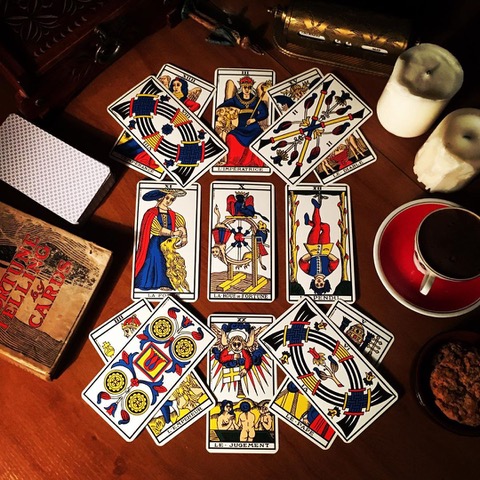 The second one is the Grimaud edition of the Tarot de Marseille. While not the oldest Tarot pattern around, Tarot de Marseille (or TdM) definitely conjures up medieval images with its woodcut style. Being a deck with abstract pips (just like our ordinary playing cards, that is, the Nine of Wands pictures exactly that – nine wands in a geometrical pattern), it can be difficult to read TdM.

What complicates the matters is the fact that the A. E. Waite interpretations and their derivatives (that became standard in the English-speaking world) aren’t used with TdM. Are there books in English about the TdM meanings? Yes. Do I like them? I can’t say I do, for various, mostly personal, reasons. So, basically, to read TdM you should pump up your French and study all the plethora of French books avaliable (after all, TdM is still the most widely used Tarot pattern in France)!

There’s another, more personal reason why I love TdM. I’m a very big fan of Shirley Jackson, the American writer and author of such magnificent books as The Haunting of Hill House, The Lottery, and quite some more. While it’s still debated among her biographers whether or not she was a true to life practicing witch, it’s well-established that she read Tarot cards for her friends and at college fairs. Guess which deck she used most? Right, the Grimaud TdM!”

4. If you have to curate a top five summer movie list what movies would you recommend and why?

“I hold an unpopular opinion that summer is the perfect time for slasher horrors and steamy films. Both go extremely well with cold beer or cider and good company, and both get under your skin wonderfully (for different reasons, though). The serious horror films have to wait for autumn, which is the most perfect time for them, while summer is much more of a guilty fun time, in regards to horror.

To make a top five list and range the films in some kind of a hierarchy would’ve been quite a difficult task, so the films I chose aren’t arranged based on any superiority, but simply because they came to my mind in that order.

Slasher films have to be represented by the classics, I think, since the modern ones lost all the cheesy fun around 2010. The original Friday the 13th  (1980) would be my obvious pick – both the camp setting, the clueless hormonal fodder of counselors, the well-known twist ending, the exquisite gore… what else do you need on a hot summer night!

Also, in the slasher area, how can one forget about the late Wes Craven? Of course, Craven’s films are a bit more serious (and seriously studied) than my previous choice, but the first Scream film has to be one of the best subversive horror films I personally have seen (many would argue that The Cabin in The Woods trumps it, but I love the pluralism of opinions). Oh, and, of course, how can one forget about young Skeet Ulrich and Matthew Lillard!

Moving onto the steamy flicks (already touched upon a bit in our slasher picks, since they tend to overlap quite often, as well as with teen films – but those are a matter of a completely different discussion), the 1999 adaptation of Patricia Highsmith’s The Talented Mr. Ripley might be the first one to pop up in my mind. Of course, this tasteful amazing thriller doesn’t have explicit sex scenes or anything – but quite a bit of sexual tension of the most classy kind, as well as some amazing performances (like young Cate Blanchett or a surprisingly sympathetic Matt Damon), as well as the beautiful summery locations and exquisite plot (thanks to the extremely wonderful original novel of Patricia Highsmith). 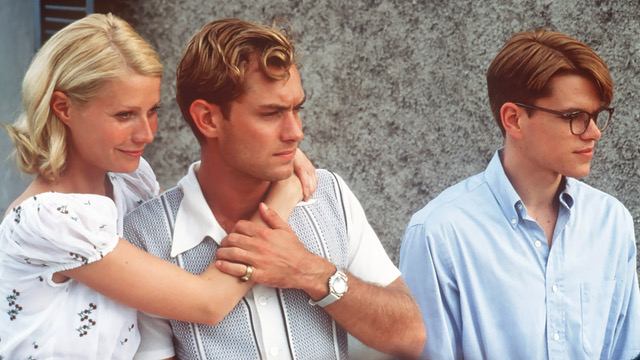 However, amidst all the horror and steam, summer isn’t summer without a good comedy. Peter Bogdanovich’s magnificently slapstick What’s Up, Doc? (1972) fits the bill perfectly. The amazing performances of Ryan O’Neil, Barbra Streisand, as well as the feature film debut of Madeline Kahn, coupled with the wonderfully witty script and hilarious visual gags are certain to leave you longing for more after the final notes of Cole Porter’s You’re The Top are over!

To round up the list, I think we should go with Bogdanovich again, but his film of a darker, steamier kind. The Last Picture Show (1971) may be set in autumn, yet it beautifully captures the atmosphere of a dusty, haunting, inescapable summer – the infernal loop you’d want to escape, yet are constantly unable to. I remember watching it for the first time, when I was around 13, and being certain that this was the moment my childhood was over, but that there was nowhere to run to. So tread carefully – there be dragons. “ 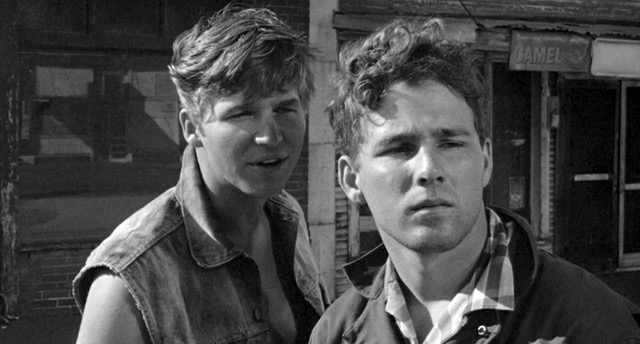 “Frankly speaking, nothing much comes to my head (probably the ravages of work take their toll). If I may repeat myself again, I’m planning to move my YouTube channel to IGTV, so I might as well share those plans. Again, it’ll probably be focused mostly on fortune-telling, with occasional book videos (or maddening ramblings and ruminations), but I personally am looking forward to actually starting it and returning to sharing all those more practical things with my audience. Ordinary Instagram posts are fine and dandy for showing (or showing off!) things, but videos allow you to fit in more of the practical instructions in them! ”

To find about more about Dan and/or add him in IG. His acount link is below:

Thank you so much for the interview Dan!!!