This week’s man of the moment is The Typewriter on Sesame Street. He would often start typing the letter of the word he wanted to show on myself and after he figure out the word  was he would show us the action or object with it.

He was not much of talker….actually come to think about it he usually just make sounds like “Noo-nee-noo-nee-noo” after he said the word he typed out. 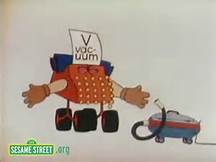 He appeared a total of 26 times on Sesame street in order to show you all of the letters of the alphabet.

Congrats Typewriter guy you made this week’s MAN OF THE MOMENT!!

4 thoughts on “Man of the Moment”