Today’s music video of the day is Genesis’s Land of Confusion (1986):

This is one of the first music videos I remember seeing on MTV.  During breaks off of school I never went to a camp or a babysitter so the tv was mainly my distraction from the outside world. To this day it is also one of the most weirdest music videos I have seen as well.

The puppets that were in the video were created by the creators of a British show called “Spitting Image.” The only way I can best describe this show is like a British version of Saturday Night Live but with puppets. (the intro of the show is below)

The idea to used these puppets was actually from Phil Collins when he saw a caricature version of himself on the show.

The music video opens up with the puppet version of Nancy and Ronald Reagan holding a stuffed bear in bed. There is also a monkey between the two and Ronald Reagan falls asleep and then starts to dream and a huge steel door opens. 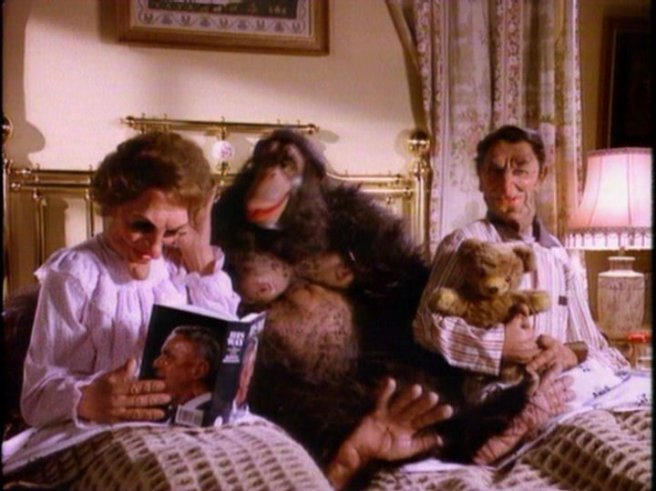 At the point the song has process and we see the band in puppet form and the viewer quickly realizes that Reagan’s dream is actually a nightmare. Because the next scene in a swamp where it is foggy and murky and we start seeing various puppet heads of political figures especially those involved with the Cold War.

Through this part of the nightmare we see Reagan in bed literally sweating puddles of sweats. 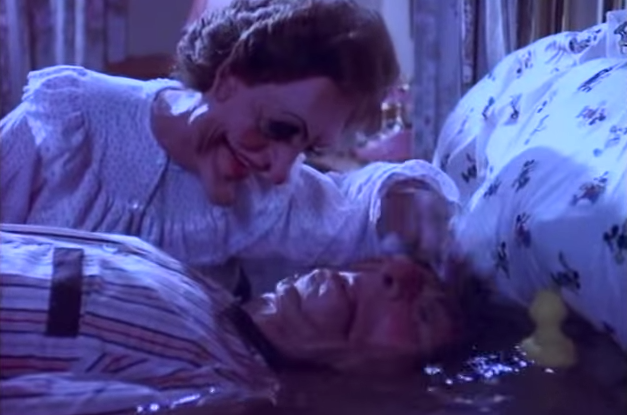 For some reason Nancy and the monkey are out of the bed looking out of a window and dancing while various scenery goes on outside. We randomly see a bird flying by and it is so hot outside it cooks itself trying to fly and turns into a roasted chicken.

The next scene is  Reagan dressing in a superman costume and running in the streets while it cuts to different dictators and world leaders giving speeches in front of crowds. I know this sounds weird but it follows the lyrics of the song perfectly in terms of matching the scene. 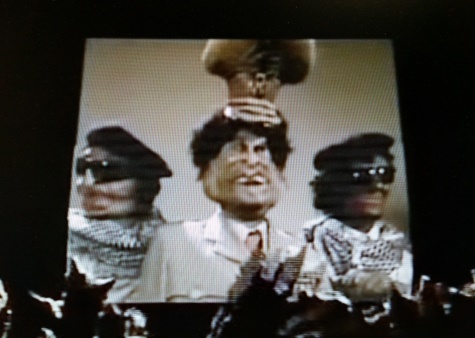 While Reagan is running through the street a dinosaur with some massive jewelry stomps on this cape and make him watch videos of “Spitting Image” which makes Reagan forgets about charging out to save the world and instead goes back to sleep. He then dreams about being in prehistoric times where he meets Nancy and a bunch of prehistoric animals. 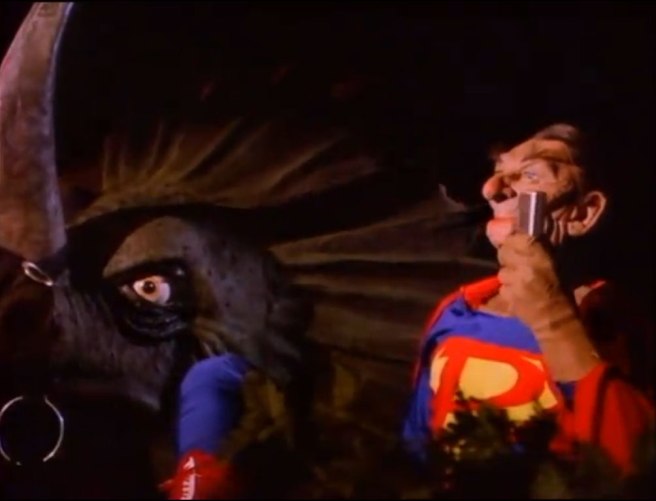 As the song goes kind of slow and romantic like so does the video we see all of the prehistoric animals laughing, dancing and enjoying breakfast.  And the only thing that snapped Reagan out of that dream was a bone thrown in the air.

Throughout the next sequence it jumps to Genesis to a bunch of other musicians like Tina Turner, and David Bowie. We also see Reagan in a cowboy outfit riding the same dinosaur that stopped him preciously. (The only thing I think for the reference of the cowboy outfit is Reagan many acting roles as a cowboy)

We then see more celebrity puppets singing (probably a spoof of the video “We are the World”) and then we see cowboy Reagan go to the steel door was opened so easily in the beginning of the video is now nearly impossible to open. Reagan starts banging furiously on it and the real Ronald Reagan puppet finally wakes up in a pool of sweat. He sweated so much during the dream that we see Nancy wearing a pair of scuba googles. 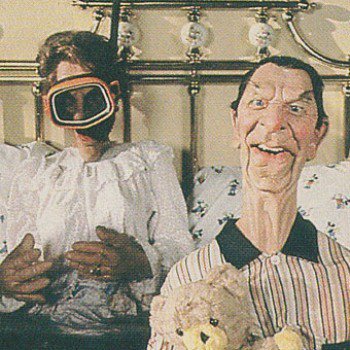 The last segment we see in the video is that Reagan is thirsty and gets a cup of water that is next to his nightstand and  misses his mouth completely and it lands on Nancy. Noticing that he miss he wants more water and we see two red buttons on the top on the nightstand. One is marked “Nurse” and the other is marked “Nuke” Reagan hits the wrong button and hits “Nuke” which causes a massive explosive and of course has no idea what has happen he thinks it was the nurses button. 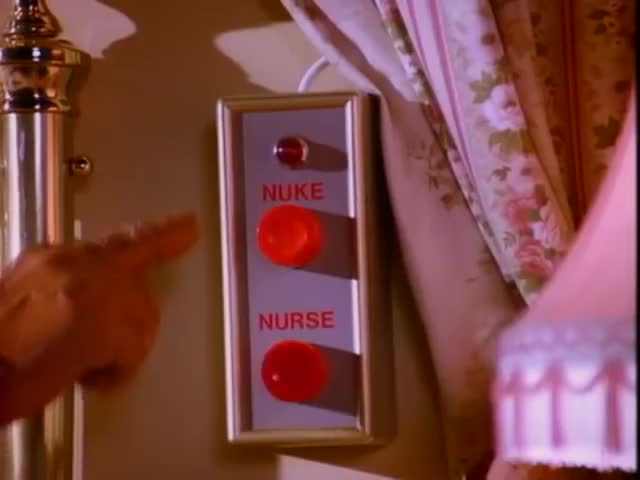