Growing up I immensely enjoyed the bright colors and action pack cartoon that is  known as the  Powerpuff Girls.

What was more interesting then the heroes on the show were the villains! So here our some of my favorite Powerpuff Villians.

Him was always the most fashionable villain on the cartoon series and a close talker. With his thigh high black heels boot and fantastic red trim jacket he was my prefer villain fashionista.  He is the kind of villain that played with the Powerpuff girl’s mind and usually it was effective enough because they would quickly turned against each other. With his unique high pitch but echo sounding voice and claw hands. He truly carried the villain persona a 100% throughout the series.

They are the kind of villains that fall into the category dumb but endearing villains. The head of the gang is Bossman who is the most talkative of the three and he wears the gray hat. Then there is Junior who is the smallest of the three and wears the black hat. He doesn’t really talk as much as the other two and when he does he usually just repeats what Bossman is saying. Finally their is Silm he wears the tan hat and is little slower than the other two.

This is one my favorite gang of villains on the show. They reminded of a group of high seniors who skip class to go to parking lot and smoke and talk about how much life sucks!

Ace is the guy with the orange blue vest and always wears sunglasses even at night! He is a big of a charmer and uses it to his advantage. He is the front man for the group. 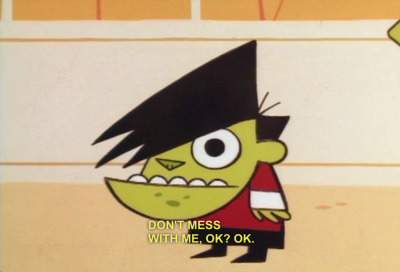 Lil Arturo ( Real name is Arturo de la Guerra). He is the smallest one of the group which the gang uses his tiny size to their advantage when needing someone to get through small spaces. He seems to be the one who enjoy creating the most trouble as well.

Snake. His name came from his tongue having a split in the front and physical cartoon appearance.  He is the second person in charge of the group and always wears a brown cap.

Big Billy is the big guy with a child like imagination. Always wearing smaller clothing and is very dedicated to the gang and their evil ways. A fact about Big Billy is the he only have one eye!

Grubber’s full name is Grubber J. Gribberish and has eyes that always stay in that shooting eye like appearance.  He doesn’t talk just shoots out the random raspberry to communicate. His hidden talent is playing the violin.

Fuzzy Lumpkins is my favorite name for a villain EVER!!! He is often compared to a pink version of Bigfoot. He usual attire include overalls with only one side buttoned up and no shirt. He often carries around a banjo that he named Jo which he plays most of the time during the series. He also carries the honor of being the first villain that was on the series.

Sedusa-  she is half lady half gorgon. She often uses her latter half to make men do her bidding and uses her hair as a weapon when she is fighting. Her mood are often known by her eye color. When her eyes are green she is a nice normal self but when they turn red that is when she is mad and turns into a villain.

Which villain is your favorite in the series? Comment below!