In this installment of welcome to the Insta-hood I interviewed :@video_macabro

“My name is Eduardo Garza (but everyone calls me Eddie) and I was born in Monterrey, Mexico in 1989. I’m the oldest of three with two younger sisters—no brothers. At the age of four my family immigrated to the United States. I became a naturalized citizen and have been living in Texas ever since. I cherish my citizenship and the choices my parents made to give their children a better life. I don’t think that they would ever have guessed their baby boy would grow up to be a seeker of trash films and an obsessive collector of fake food (yeah… that’s a thing I do). I grew up in the 90s. I loved my childhood, but I was always wanted to be an adult. I loved the idea of being able to stay up late watching horror movies and driving to wherever I wanted whenever I wanted. Now that’s a reality and you know what, it’s pretty cool. I’m currently a single dog father (any singles out there, hit me up) and I have a house full of weird stuff.

I’m a collector of a lot of different things… Universal Monsters, old Halloween toys, true-crime books, alien stuff, movies, fake food, fake poop, et cetera… I don’t remember the year or how old I was, but I remember a couple of movies that got me interested in the genre.

First, The Neverending Story (1984). I remember this movie being really weird and those moments where the child empress seems to break the fourth wall to talk to Bastian always creeped me out. Now obviously, it doesn’t have the same effect, but I am fond of those memories. I collect anything I can that’s NES related. The second film, I’m thinking of is a roughly cut version of The McPherson Tape (1989) I saw when I was really young. It’s a found-footage movie that came out years before The Blair Witch Project and centers around a family’s tragic night fighting off a bunch of grey aliens. I legitimately believed it was real. Growing up in a Hispanic home, we would watch a lot of Spanish TV and there was a TV personality named Jaime Maussan who was a ufoligist and hosted a UFO/Alien footage show where he would show clips of different supposed video evidence of extraterrestrial beings and their round disc-shaped ships. He would analyze the hazy images and pause and rewind and talk about magnetohydrodynamics or echelon formations or alien flares and, to me, it wasn’t only otherworldy, it was absolutely terrifying. How could beings like this exist?

Many nights I would stay up praying nothing remotely like what I was seeing on this guy’s show would ever manifest itself to me. And then, The McPherson Tape… this movie was presented to me as seriously as evidence is presented in a court room. It was the closest I’ve ever felt to watching a snuff film. It is the one movie that truly terrified me, but it had everything to do with my age, my limited understanding of the world, and my, apparently, innermost fear of aliens. Now when people ask me (and the often do) what the scariest movie I’ve ever seen is, I’m not sure how to answer. I’m obviously thinking “The Mcpherson Tape!!”, but I never say that. I simply tell people that no movie has ever scared me and that’s a lie. ”

2. Why compeled you to start a cult?

“I grew up in the Mormon church. It’s the only way of life I knew until 2008 when I left the church and even moved out of Texas. I started to really investigate religion and fell in love with finding out as much as I possibly could about other people’s faith. I became obsessed with scripture and spirituality and spiritism. Believe it or not I decided to return to the Mormon church. It, for me, had the most interesting history. It’s a history and a foundation full of magick, seer stones, revelation, extra-terrestrial visitors, polygamous scandals, new scripture, spirits, rituals, et cetera. Of course, for me, there was also a familiarity with the religion that existed, but now it was totally different, because I truly felt converted. I had researched enough and was compelled to share the message. That’s right- I became a Mormon missionary. Yes, the kind that knocks on your door and asks if you have to time to hear about the church. I did that for two awesome years. The difference between me and other regular missionaries is I started to go really deep into the scripture. I went deep into really old conferences of the church. Old meetings. As soon as I returned home in 2013, I started collecting everything I could get my hands on that had to do with doctrine and modern revelation. I learned absolutely everything about the church. I became so well-grounded in the doctrine of the restoration of the church of God that I started to see how the modern Mormon faith had changed from when it was founded in 1830. It has changed so much! It is virtually nothing like the church that it’s founder Joseph Smith had helped form. So I felt I had to do something about it. I started to truly believe that I had been placed on Earth to fix the church… the church I loved so very much. I felt impressed to start a record of personal revelation. Here is where things get crazy. I started to feel the presence of something in my life, a real presence. This presence communed with me through thoughts and feelings and called himself Abrac. I only physically saw Abrac once. He instructed me to write. I wrote everything he dictated to me until I finished the book. This is a book that no one has read, except for me. It tells of a land called Gok that exists within the same dimension of space as Earth, but is a lot farther away, in a “government” or realm called Goriax. It contains bible-like stories from that planet and expands on Mormon doctrine of deification and blood-relations of the Gods. I was really close to printing the book and starting to spread the message about another testament of Jesus Christ (the book also contains conversations that Jesus Christ had in the Garden of Gethsemane with Satan in a period that is much longer than the Bible says). But for one reason or another, I started to question everything. Had I gone to deep? Had I simply imagined these feelings? Seven years later, here I am and I’m glad I didn’t publish. A lot of good has happened and I’m very happy with where I am in life. I feel like a positive influence for the most part and I hope to keep it that way.”

3. How did you come up with your Instagram name?

“My Instagram name used to be video_trash. Some of my oldest followers might remember that. I decided that I wanted to create something that is more inviting to other sub-genres so I decided to switch to the Spanish word for “Macabre” which is “Macabro” and is pronounced muh-caw-bro. In Spanish it doesn’t necessarily only have to deal with death or injury, but can be translated to “ghoulish” or “weird.”

4. What are the top 3 weirdest movies you have ever watched and why?

“That’s a good question, but one that may not have the desired response for your readers. I’ve seen plenty of classically labeled “weird” movies… things like Funky Forest (2005), Cat Soup (2001), Eraserhead (1977), Naked Lunch (1991), et cetera… and obviously a lot of “weird” art films like what The Holy Mountain (1973) was trying to do. But a lot of those movies were trying to be weird for shock value or provocative artistic expression. Sure, they may relate to the times and may even contain deep philosophical drama within the subtext, but are they really weird? Since they are deliberately trying to be weird, it’s almost as if they aren’t weird at all. They are just art to me in the same way as when you walk into an art gallery. The weirdness about a movie doesn’t come so much from aesthetic for me as it does from the plot. I’m reminded about The Rocky Horror Picture Show (1975). Richard O’Brien’s musical is absolutely wonderful, but I only ever saw the movie version. I was barely in High School when I saw it for the first time and thought it was hilarious, and as the years went by the plot seemed to sound weirder. Fluid-sexual transvestite aliens come to Earth to impart their sexual wisdom upon us lowly humans. Now you can probably take any mainstream movie, dumb down the plot, and then it sounds really weird, which is probably what I’m doing. Some strange movies I recommend that I think are more than just weird, but actually really good are:

Panna a Netvor (1979) – A beautiful gothic retelling of the Beauty and the Beast where the Beast looks like a giant bird.

The Cat (1992) – a Hong Kong sci-fi movie about a cat from space teaming up with an alien girl to battle another alien… all here on Earth!

Hiruko the Goblin (1991) – a movie about a space goblin that is sent here for the sole purpose of beheading people and turning them into spider demons. 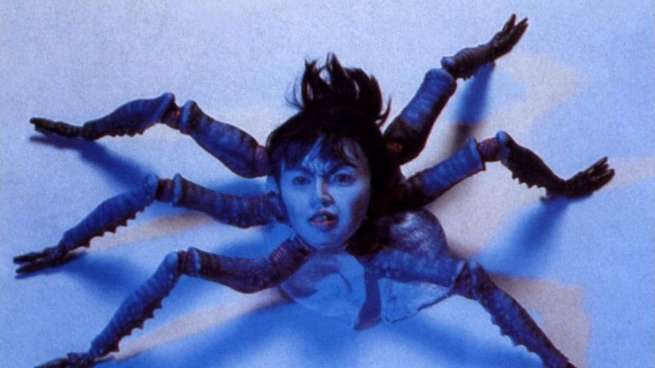 “People don’t know that about a month ago I started a YouTube channel where I share some of my toys and things. It’s nothing like what I do on Instagram where I edit videos with music. This is a pretty boring thing where I just talk about things that I have. It’s called “Cryptic Cauldron”… I currently have zero subscribers. ”

If you like to know more information or have questions for Eduardo. His social media outlets are below:

Thank you so much for the interview!!