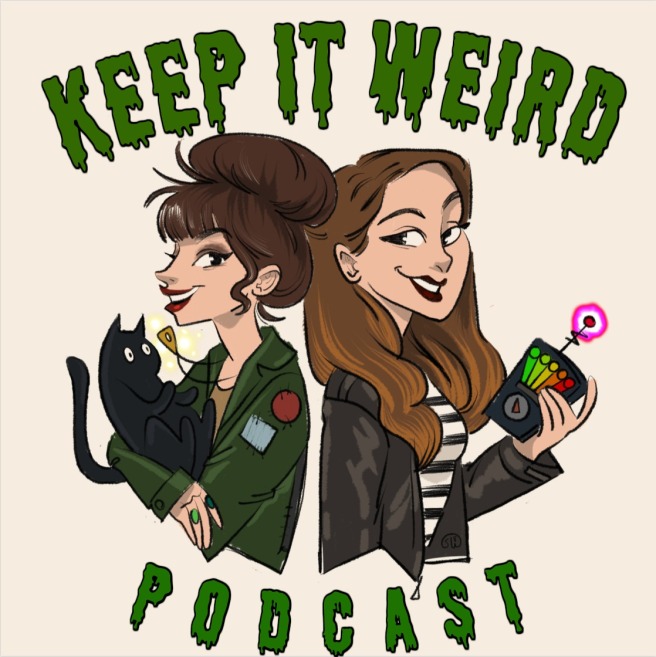 1. Can you talk about your podcast a little bit?

“We are Keep It Weird, the podcast for all things strange, unusual, paranormal, supernatural, creepy, sticky, gross, scary and everything in between!  Produced, hosted, and owned by two ladies – Ashley Casseday and Lauren Ogle.  We actually joined the podcast game long before everyone and their mom had a podcast– we’ve been doing Keep It Weird since 2016.  Actually when we began the show we couldn’t find any other shows doing what we were doing– combining the paranormal with true crime.  Of course within a year or two there were hundreds, so we had to switch it up a bit but we’re actually grateful for it.  It made our podcast content so much more interesting and it pushed us into being a better show.

Today we really focus on all things weird; we still cover the paranormal and supernatural and true crime but we also have episodes on the human body, nature, food, sex, twins, religion, cults, conspiracies…there’s even a sports episode!  Our goal is to be one of the best researched podcasts out there.  For example, when we did our artificial intelligence episode; we didn’t just talk about the present and future of AI.  We discussed artificial intelligence in literature and how it affected the products we use today.  We theorized the future of AI through a legal lens by asking what type of laws would be written for AI.  Would they have rights?  Would the destruction of a self aware cybernetic organism be murder?  Will we ever be able to upload our consciousness and if so how does that affect the ideas of heaven and hell?  What even is consciousness?

Each season we get to go on a full paranormal investigation and every week (at least before isolation) we get to sit down with a friend, coworker, comedian, or expert and chat about something strange and unusual.  We even have YouTube content- “This Week in Weird” where we bring you the strangest news stories from around the world and “What Was That?” which is where we bring you the creepiest paranormal videos, EVPs, and photos that are submitted to us.  It is SO much work, but it’s a blast. A true labor of love.”

2.  How did you come up with the name and the concept of your podcast?

“Back in 2016, we were both at a place in our lives where we were lacking a creative outlet.  We had been friends for 7 years and had always wanted to work together in a creative way and podcasts were something a lot of people had just started listening to and we thought… “well we could do that!”
The content was easy; a lot of what we talked about when we got together was ghosts, aliens, and the latest true crime documentary, so we knew we could talk about it for hours and hours and never get bored.
Coming up with a name was interesting because you need something that encompasses your entire show.  The strange and unusual, especially through the lens that we view it, is such a vast topic.  Eventually we landed on Keep It Weird! It’s how we end all of our episodes, it’s almost a reminder for all our listeners to feel comfortable being strange.” 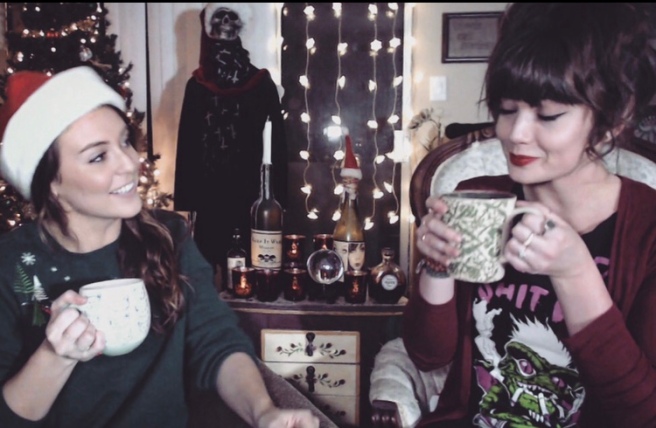 3.What are the top three favorite shows you have done and why?

“My Body Ate My Balls:  In season 3 we did a human body episode and our guest was a comedian named Nick Wuthrich who came on the show to tell us all about his life as a eunuch.  He was born as a eunuch so his entire life has been different– struggling with taking testosterone and the strange things that will do to your body, hiding it from friends and classmates, and finally accepting it as an adult and actually using it in his standup routines.

Shake It Up: Murder in the Midwest & Can’t Shake This Feeling: Murder in the Midwest:  This one was special because of the amount of work that was put into it.  A lot of podcasts (including ours) cover true crime stories and they get their information from the internet or books that have already been written on the subject.  For Murder in the Midwest– we got to do the investigating ourselves.  Ashley and an old friend of hers from her hometown researched the 1975 murder of John Shakespeare in Centralia, Illinois.  We had help from local law enforcement, local true crime writers, private investigators, at one point the BBC even got involved.  It was a really special experience and even though it was particularly exhausting and at times very difficult it was very rewarding.

Hometown Haunts: We’re cheating a bit here because this encompasses a series.  We do something called Hometown Haunts where we will invite a guest on to chat about their home state and all the WEIRDness that exists there.  We’ll cover hauntings, cryptids, true crime, UFO activity, and any other crazy things that have taken place in their home state.  We’ve had many comedians and actors on the show for this segment and we have covered California, New York, Texas, Michigan, Maine, Iowa, and as soon as we can safely have guests on again we’re doing an Ontario, Canada episode with a very special guest!”

4. What interests do you ladies have outside of your podcast that not a lot of people know that you like?

We are actually incredibly transparent on our show– our listeners know all of our likes and dislikes, they hear about our sad weeks and our happy weeks.  They know about our mental health diagnoses, our significant others, they knew all about Lauren’s pregnancy and what it was like to have and now raise a child.  We are very open.  And we are extremely lucky to have the listenership that we have– they are all so wonderful and share their lives with us as well.  One of the saddest parts of our show getting bigger and bigger is not being able to keep up with the messages and emails. 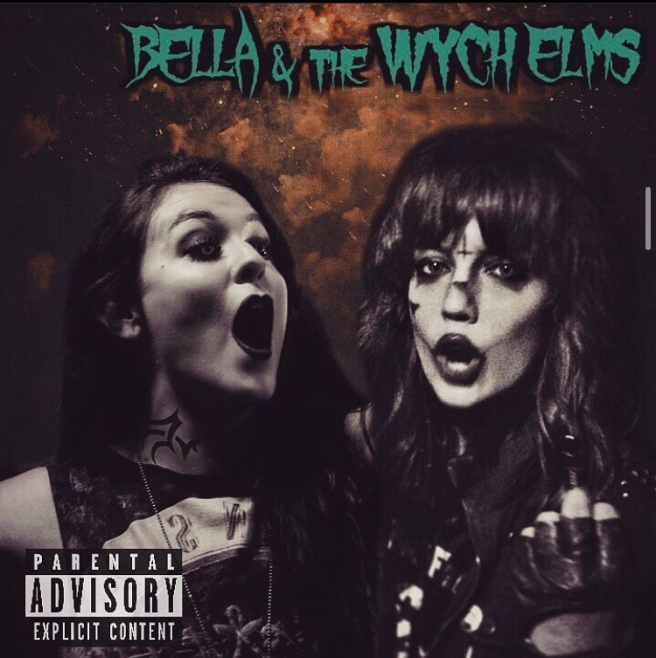 But for the sake of the reader- Lauren sings in a cover band called Dr. Spaceman and has her own children’s music business here in LA called Peek-A-Boo Music and she’s raising an adorable one year old.  Ashley spends most of her time producing and editing the show but she also collects occult books, pets cats, and is becoming a damn fine chef. 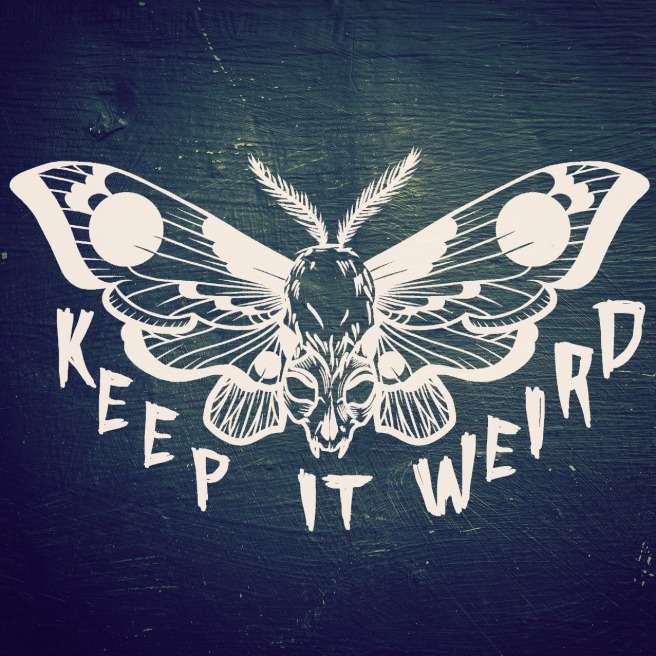 Well unfortunately the entire country is shut down for the time being so we’re mostly just trying to hang on and record our podcast remotely!  It’s unfortunate to have had to cut out our guests for the time being, but it’s also very cool that recording a podcast is something that is actually very easy to do with someone who you are isolated from.

We do have one piece of very exciting news but unfortunately it’s not something that we can share yet!